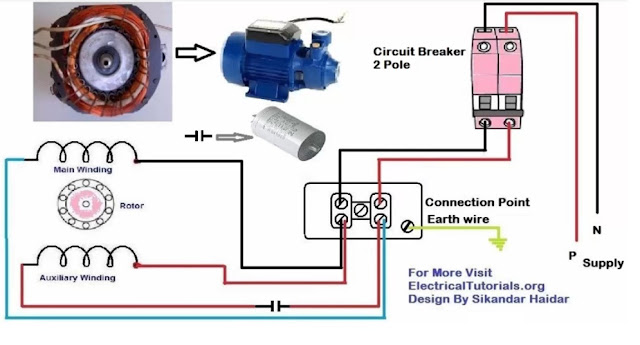 We can control the single phase motor with many different methods. And I will try my level best to tech you about all methods which I can do and which I learned. In this post I am just sharing a single phase motor wiring diagram using a double pole circuit breaker. In the below diagram I shown the internal motor winding connection. I shown the main wiring which we also known with name of running winding. And auxiliary winding which also known with the name of starting winding. The both winding ends which connect together is called common point or common wire and main winding other end called the running wire. And the auxiliary winding other end is called starting wire. I also talked about the internally winding in the below video tutorial. But this is only a short guide and IN SHA ALLAH soon I will make another video in which I explain completely the single phase internally winding connection. Now come to wiring connection. To wire motor with circuit breaker or install the single phase motor you need do some steps which are:

The above the steps to control a one phase motor from double pole circuit breaker, but if you are not professional or not have any skill in electrical works then I recommend don't try this . Because electric works is dangerous. However if you want to do this connection himself then follow each safety roles.

Here is a video tutorial which helps you more to understand single phase motor controlling using double pole circuit breaker in Urdu/Hindi language. So for better understanding kindly watch the below video tutorial.


I hope after this post and video tutorial about the single phase motor wiring and controlling using circuit breaker. Now you will be understood. However if still you have any question or need any wiring diagram then you can tell me by using the below comment box. We will try our level best to provide your require info. Also share this post with your friends on social media.
Shares
NEXT ARTICLE Next Post
PREVIOUS ARTICLE Previous Post
NEXT ARTICLE Next Post
PREVIOUS ARTICLE Previous Post